(May Issue) Featuring Dr. Lorenc in a story on Modern Luxury Manhattan.

Six Women Get Real About Their Horrible Experiences with Fillers

Can Botox Treat Depressions? This Injectable Might Soften your Fine Lines and Your Mood”

Photos! See The Real Housewives of New York City Cast with No Makeup

The Real Housewives of New York Cast Goes Without Makeup for People: See their Photos!

The Real Housewives of New York Cast Goes Without Makeup for People: See their Photos! ​A growing body of research suggests that Botox injections may help alleviate the symptoms of depression, and the boost lasts a lot longer than some of the cosmetic benefits.

Curious About Botox? 11 Things You Need to Know First Your sister-in-law and your neighbor have gone under the needle and look amazing. Before you run to the dermatologist to get your own Botox, here’s what you need to know.

“It may be the most well known, but Botox is just one type of neurotoxin on the market. Other, next-level neurotoxins are Dysport, FDA-approved in 2009, and Xeomin, FDA-approved in 2011. “They all originate from the same strain of bacteria, therefore they work essentially in the same way,” explains Z. Paul Lorenc, MD, a board-certified aesthetic plastic surgeon in Manhattan.” 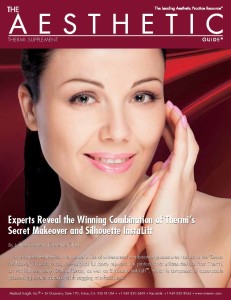 “Even though I’m a surgeon this non-surgical therapy is actually increasing my surgical practice. The innovation think about Thermi devices is that they are very well controlled and extremely safe.”

Z. Paul Lorenc, M.D., F.A.C.S., a plastic surgeon in New York City, says that “Brotox” is a result of men who have had a good experience recruiting their friends….Click here to read the full article on mental_floss. 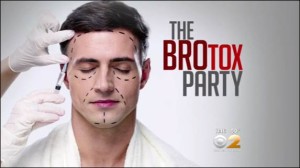 Dr. Lorenc was featured in a segment on CBS New York that was titled, “The Brotox Party.”

Dr. Lorenc is included in the segment as the expert administering the Botox treatments, and he speaks about the rise of these injectable procedures. Dr. Lorenc states, “I think it’s driven by social media to a large extent. It’s also representative of a tremendous increase, 20 percent increase, from last year to this year of injectables such as Botox.”

The male patients spoke about how they feel better about themselves after coming in as a group for Botox, and pictures/video of the guys out at the bar afterward were also included. 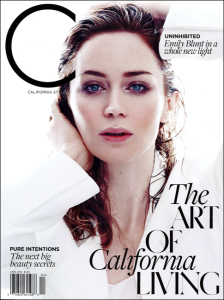 The story outlines all Thermi procedures, stating “Thermi procedures are the latest cosmetic innovations to join the fight against aging…All treatments are either minimally or noninvasive and use heat energy to target collagen and fat cells beneath the skin.” The story highlights ThermiSmooth, ThermiTight, ThermiVA, and ThermiRase. For ThermiTight it states, “ThermiTight targets areas where there’s excess fat and loose skin such as under the chin and arms. Inserting a tiny probe, a controlled amount of thermal energy is applied to targeted tissue, essentially melting the fat while tightening the skin.”

Dr. Lorenc is credited in this piece as, “Z. Paul Lorenc, M.D. (Lorenc.com), one of the first doctors in the U.S. to offer all Thermi options.” 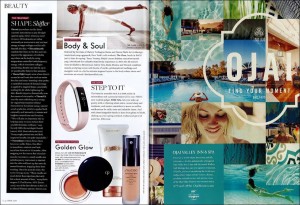 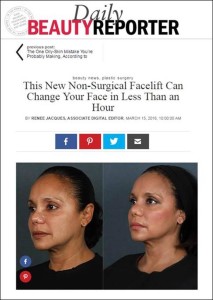 Allure.com is currently featuring Dr. Lorenc and The Silhouette Instalift in an article titled, “This New Non-Surgical Facelift Can Change Your Face in less Than an Hour.”  Click here to read the full article.

“I Got A Chemical Peel On My Legs To Get Gams Like Taylor Swift.” 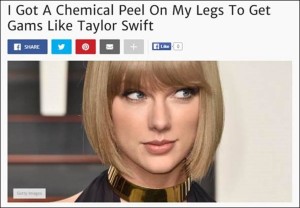 Dr. Lorenc has been featured by EliteDaily.com in an article on the chemical peel treatment offered at his practice.  Click here to read the full article. 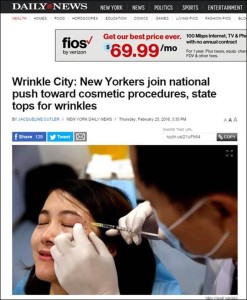 Dr. Lorenc is quoted in a New York Daily News article discussing the effect New York has on skin compared to other states in the US. Click here to read the full article. 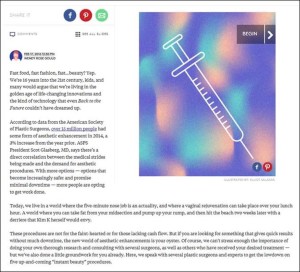 Dr. Lorenc is featured in this article discussing the ThermiVA procedure. Click here to read the full article.

“5 Latinas Tell Us What They Really Think About Vaginal Tightening.”

Dr. Lorenc & his ThermiVA procedure are featured in this article from Latina Magazine Online about vaginal tightening. Click here to read the full article. 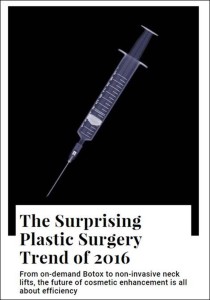 “The Surprising Plastic Surgery Trend of 2016.” 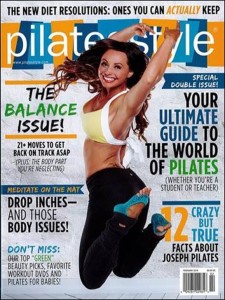 Dr. Lorenc is quoted in a Pilates Style Magazine article about the detrimental effects that pollution can have on skin. He states, “In 2014, Olay skin care presented a study to the annual conference of the Chinese dermatologist association that showed pollution had significantly detrimental effects on the skin. The most interesting finding in their study was that living in a highly polluted area ages people 10 percent faster than [when] people live in less polluted areas.” 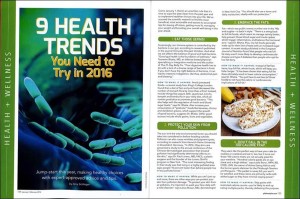 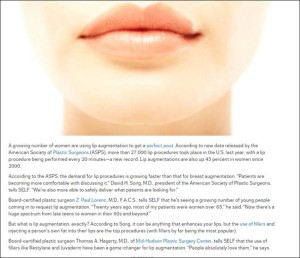 “You Won’t Believe How Many Women Are Getting Lip Augmentation Surgery.”

Dr. Lorenc discusses the growing age range of those coming into his office for lip augmentation. Click here to read the full article.

“Where Did Their Boobs Go?!” 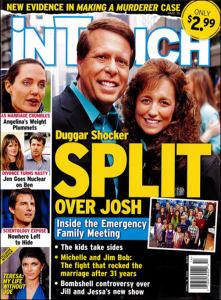 Dr. Lorenc was recently included in an issue of InTouch Magazine. He comments on celebrities such as Nicole Kidman, Scarlett Johansson, Kylie Jenner, and Taylor Swift. On Nicole Kidman, Dr. Lorenc quotes “It looks like Nicole had augmentation and then got the implants removed.” He also comments on Taylor Swift stating that she is “very slender by nature,” and her less curvy look reflects her natural figure. 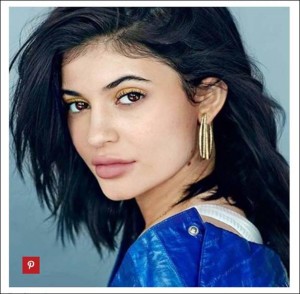 “The Most Desired Lip Shapes, According to a Plastic Surgeon.”

“25 Brilliant Tricks to Score Free Swag for Your Wedding.” 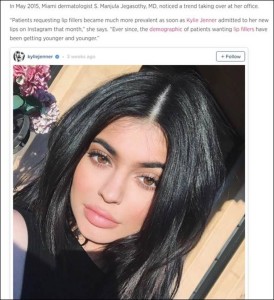 Dr. Lorenc is featured in an article on NewBeauty.com discussing plastic surgery among teenagers. Click here to view the article. 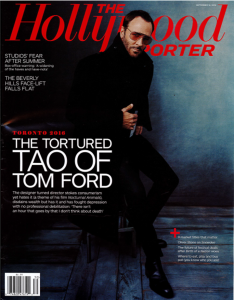 Dr. Lorenc was included in a recent issue of The Hollywood Reporter. The story discusses how invasive surgical procedures such as facelifts are being replaced with more modern techniques. Click here to view the article. 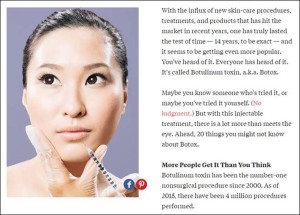 “20 Things You Never Knew About Botox.”

Dr. Lorenc was included in an article on Refinery29 discussing the many uses of Botox. Click here to view the full article.

Dr. Lorenc discusses anti-aging techniques in this article on Prevention.com. Click here to view the article. 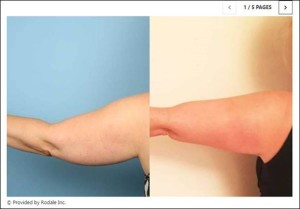 Dr. Lorenc was included in this story for NewBeauty.com speaking to his calf augmentation procedure. He explains that he uses solid, silicone ‘gummy bear’ implants made for the calves. He goes on to share that results are permanent, and it is for both women and men. He states, “It’s not just for body builders; it’s a really a good procedure for anyone who is self-conscious about the size of their calves.” Click here to read the full article.

“The Most Dangerous Health Trends We Saw in 2016” 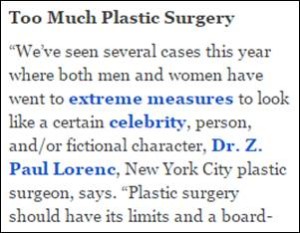 Dr. Lorenc discusses the dangerous health trend of too much plastic surgery. He explains that we’ve seen several cases this year where people went to extreme measures to look like a certain celebrity, person, or fictional character. He also notes the importance of going to a board-certified surgeon who will only perform safe procedures. Click here to read the full article.